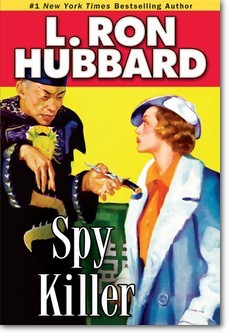 Kurt Reid may be innocent of the murder he's charged with (and of grand larceny, for that matter), but he's got no time to be thrown in jail and defend himself. Instead, Reid flees to pre-Communist China and Shanghai, the exotic city of mystery and death.

Reid takes refuge in a tea house where he meets White Russian Varinka Savischna, whom he manages to rescue from certain death. As beautiful as she is smart, she recruits him in her crusade against Chinese intelligence services. Unfortunately, Reid manages to get himself captured by the Chinese and blackmailed into pursuing and assassinating a Japanese spy.

Now Reid must enter the cloak-and-dagger world of espionage and intrigue, where everything and everyone is not who or what they appear to be.

The water was black and the swim was long, but when a man is faced with death he does not consider odds. Kurt Reid went over the side of the tanker Rangoon in a clean dive, cleaving the swirling dark surface of the Huangpu.