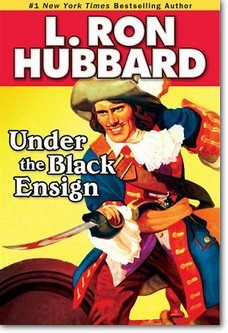 Under the Black Ensign (Paperback)

Tom Bristol's career as first mate of the Maryland bark Randolph  abruptly ends during shore leave when he is press-ganged into serving aboard the British HMS Terror.

Toil under the cruel whip of England is merciless: Crew members are treated as little more than chattel—barely fed, made to work past the brink of exhaustion and kept in line with a cat-o'-nine-tails. Fate finally smiles on young Bristol when the vessel is overtaken by pirates and he gladly turns coat and joins them.

Yet Tom's new pirate mates desert him quickly after he's found guilty of killing a mutinous pirate and unwittingly harboring a woman on board. Marooned on a deserted island, Tom has nothing but a small supply of water, a gun and just enough bullets to kill himself. But Tom dreams up a devious plan that will return him to the high seas and make his past adventures pale compared to what he has in store for his many enemies. . . .

Under the Black Ensign

Not that this was a particularly cruel set of officers. Perhaps they were even more kindly than the average of the Royal Navy. But this was 1680, and the tide of lust for empire had swung high in the great nations of the world. Human life was nothing. Compassion was almost forgotten. Britain was setting herself to rule the seas, and Spain was setting the example for bestiality.